While developing, we went snowboarding a lot at a nearby resort. People kept getting injured, though... Originally, this stage was planned to begin after Zone 8 (Flying Battery Zone). Sonic was going to break down the door from the airship and make a snowboard out of it on the way down. The other characters can fly, so they wouldn't appear in that event.

We're going to have to take Naka's word about the snowboarding bit. However, one look at standalone Sonic 3's level select and Flying Battery Zone's original place in the level order becomes evident: 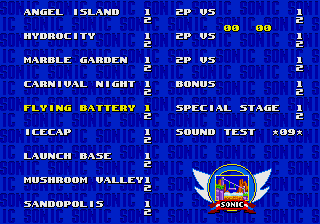 There it is, smack dab between Carnival Night Zone and Icecap Zone. If you go and check the sound test, FBZ's music occupies slots $09 and $0A, right between CNZ and ICZ's music. In fact, Flying Battery Zone is the only level which appears out of turn in the game's internal level order. This suggests it was a relatively late change, a notion supported by the presence of fully-functional bosses in standalone Sonic 3. 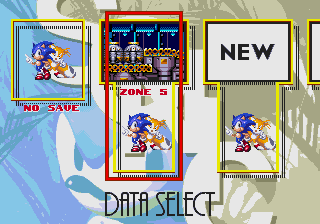 If you have a Pro Action Replay or PAR-compatible emulator or flash cart, you can use the code FFE6CF:0004 to set the first Data Select slot to Zone 5. No, not Icecap Zone, the real Zone 5. It even comes with its own, otherwise unused preview icon, which is different to the one in Sonic & Knuckles.

The stage itself has been completely removed though, so if you try to play it, the game just freezes.