In my previous post, I pointed out how S3A's object layout for Flying Battery Zone 2 has a second object placed slightly to the left of the end capsule, at coordinates $3130, $6D8:
There isn't really any easy way to make the game load the level properly, and even if it did, there aren't any level blocks to stand on. Instead, let's just look up object ID $B4, or 180 in the object list:
That's right! Like I documented in this video a couple of years back, Flying Battery Zone's bosses are fully implemented in Sonic 3, apart from an overall lack of sound effects, anyway. This includes act 2's laser miniboss even though it's not actually placed in the object layout.

Incidentally, I based that video's presentation on GoldS' legendary Sonic 3 and Knuckles Glitches and Oversights video series, which I sure hope all of you have already watched by now. 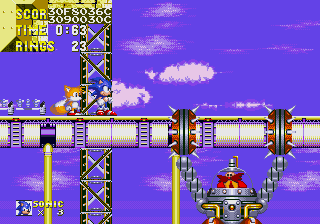 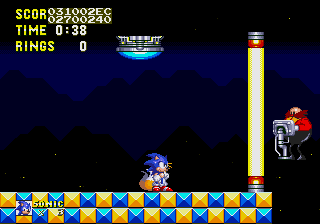 That's not all, though. If we go a bit further up the list, what do you suppose we'll find sandwiched between the enemies for Marble Garden Zone and Icecap Zone? (Carnival Night Zone's enemies are even higher up for some reason.)
Both of Flying Battery Zone's regular enemies are also implemented! However, since their graphics normally get loaded through a PLC at the start of the level, they went out the door with the rest of the level load block.

Much like the bosses, both enemies are fully functional, except that Blaster tends to get stuck in place after firing some of his bullets. Oh, and you can jump on his bullets and they blow up like enemies. Freaky.
Posted by Fred Bronze