The entrance to the boss in Hydrocity Zone 1 is quite similar to the ghost capsule in Sandopolis Zone 2. You go around a loop and then fall to the room below, where once again, new graphics have stealthily been loaded through a PLC call, in order to render an object which is immediately visible. This time it's the agitator at the center of the boss area. 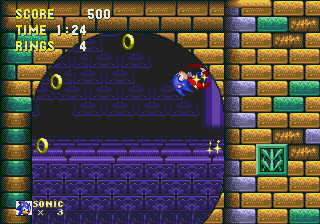 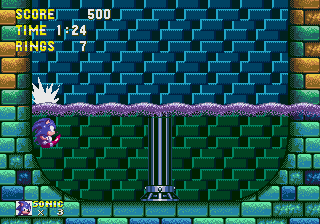 As for the mechanism itself, however, it could not be more different. The graphics for the boss and the agitator are both in the same Nemesis archive, and it's the actual boss object located beneath the loop which spawns the agitator object and loads the PLC, soon after it is scrolled within the range of the object manager. 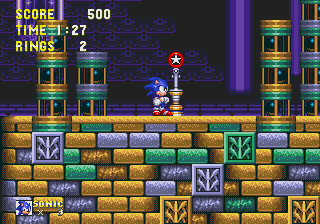 There's a snag, though. The boss loads its graphics over the DMA region for the animated elements earlier in the level, such as conveyor belts and the pseudo-3D waterline. If those elements continue running, they'll end up overwriting the boss art, so before loading it the boss sends out a signal to stop all of the level's animated PLCs, which works, but also causes the pendulum cages right before the loop to suddenly freeze in whichever frame they were at the time. 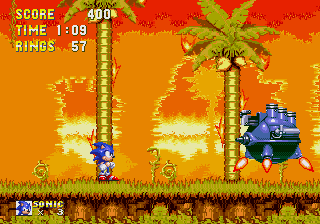 Bizarrely enough, the same thing occurs at the boss fight in Angel Island Zone 1, and I can't figure out why. The plants in the foreground and the flames in the background all stop moving as soon as the screen locks, and then resume once the boss is defeated. Maybe there was an art conflict here at one point?
Posted by Fred Bronze