Do the boss flash

Boss palettes are generally loaded to palette line 1. Because of this, even a level with a kooky enemy palette such as Angel Island Zone gets sensible HUD colors for a while. 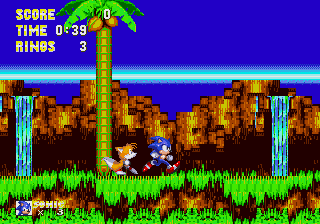 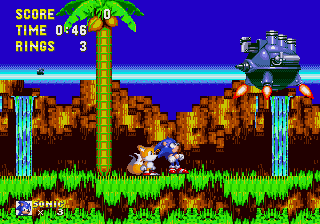 When the player deals damage to a boss, it rapidly flashes in bright colors. This is purely a palette effect, which means any other graphics using the flashing colors will also flash. In most cases, this only affects the HUD shadow.

Each boss object has its own palette flashing code, but they all follow the same general pattern. Here is the boss flash code for the Angel Island Zone 1 boss:
The CopyWordData functions are a family of helper functions which copy arbitrary word values from an array in a2 to RAM addresses from an array in a1. The number in the function's name denotes the number of words to copy.

Addresses $FC00 through $FC80 echo the state of color RAM in the VDP. Once per frame, the contents of this RAM block are DMA'd to CRAM. Therefore, writing to these addresses is equivalent to writing to CRAM.

Next time we'll see how one detail can throw the whole thing off, and why you probably never noticed anything wrong.
Posted by Fred Bronze