If you go beyond the natural end of Launch Base Zone 1, you'll come across this area before you reach the loopback: a bunch of perfectly coherent buildings that are nonetheless glued together in a nonsensical manner. 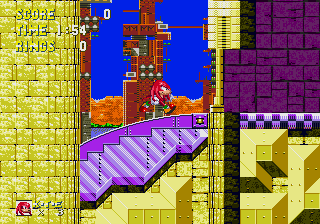 These are actually the same buildings you go through during the course of the act, as they appear from the inside and from the outside. When you enter one, the game copies the appropriate indoor section from this area over to the main layout, revealing the building's interior. When you leave, it copies over the matching outdoor section to hide it again.

Act 2 also has an out-of-bounds building, but it's tricky to reach because halfway through the level, the Death Egg bit erases all the regular chunks from the layout. The simplest solution is to scroll all the way to the end of the level, place a Star Post, hit it and die. You'll respawn in the loopback, and the Death Egg is gone until you exit the level. Now you can just go back to the left until you find it: 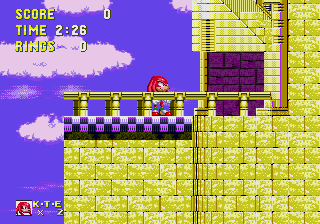 Unlike the ones in act 1, this one only has the outside version. This is because once you exit the building, there's no way to go back inside, so the game doesn't need to remember what the inside looks like.

Flying Battery Zone uses the same trick for when you enter and exit the ship. The size for this stage is set properly, so you can't go beyond the end of the level, but as it happens, the first copy area is right underneath the starting point! 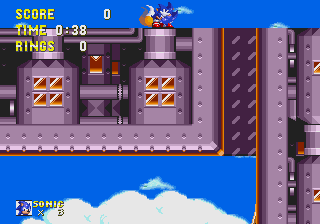 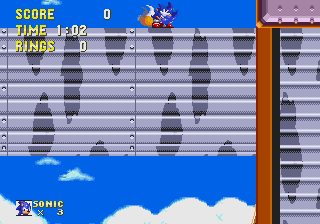 Inside... and outside. Neat!

Another one that's within bounds is Angel Island Zone 1. Right at the start of Sonic's intro sequence, if you go directly upward, you'll find the interior version of the hollowed-out tree from later in the stage. Unfortunately, the right graphics aren't loaded, making it pretty unrecognizable. But at least you can stand on it. 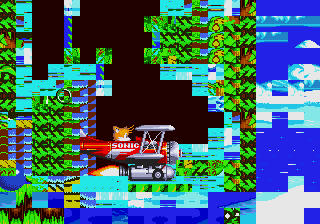 Once again, only the inside version is present because once the interior is revealed, it's never covered up again, so the game doesn't need to recall its outside appearance.
Posted by Fred Bronze